The strength and duration of the resulting pulse is independent of the rate at which the external magnetic field changes. This is what makes the Wiegand effect interesting to engineers: simple dynamos convert rotary motion into electrical energy, but their output power depends on the rotation speed; when the shaft of a dynamo turns very slowly, power levels are too low to be of much use. However, with a Wiegand wire system, the amount of electrical energy generated with each ‘flip’ of the magnetic field remains constant, however quickly – or slowly – the magnetic field changes. In POSITAL rotary encoders this reversal is generated by rotating a magnet.

How Does it Work?

A. At the beginning of the cycle, the magnetic polarity of the outer shell and the inner core and are the same.

B. When the wire is exposed to a moderate external field in the opposite direction, the outer layer of the wire shields the core, and both retain their original magnetic polarity. However, when the strength of the external field reaches a critical threshold, the influence of this shielding effect is overwhelmed and the polarity of the core of the wire will suddenly reverse. This sudden change in polarity creates a current pulse in the coil surrounding the wire.

D. As the external field diminishes, the wire retains its new polarity.

E. When the external field, now reversed, reaches the critical threshold, the core material of the Wigand wire will flip back to its original polarity, producing a current pulse in the surrounding coil.

F. This is followed quickly by a reversal of the polarity of the outer core. The wire is now back in State 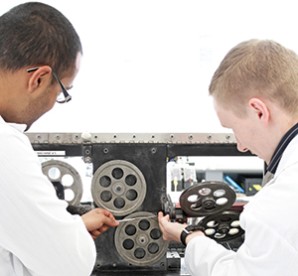